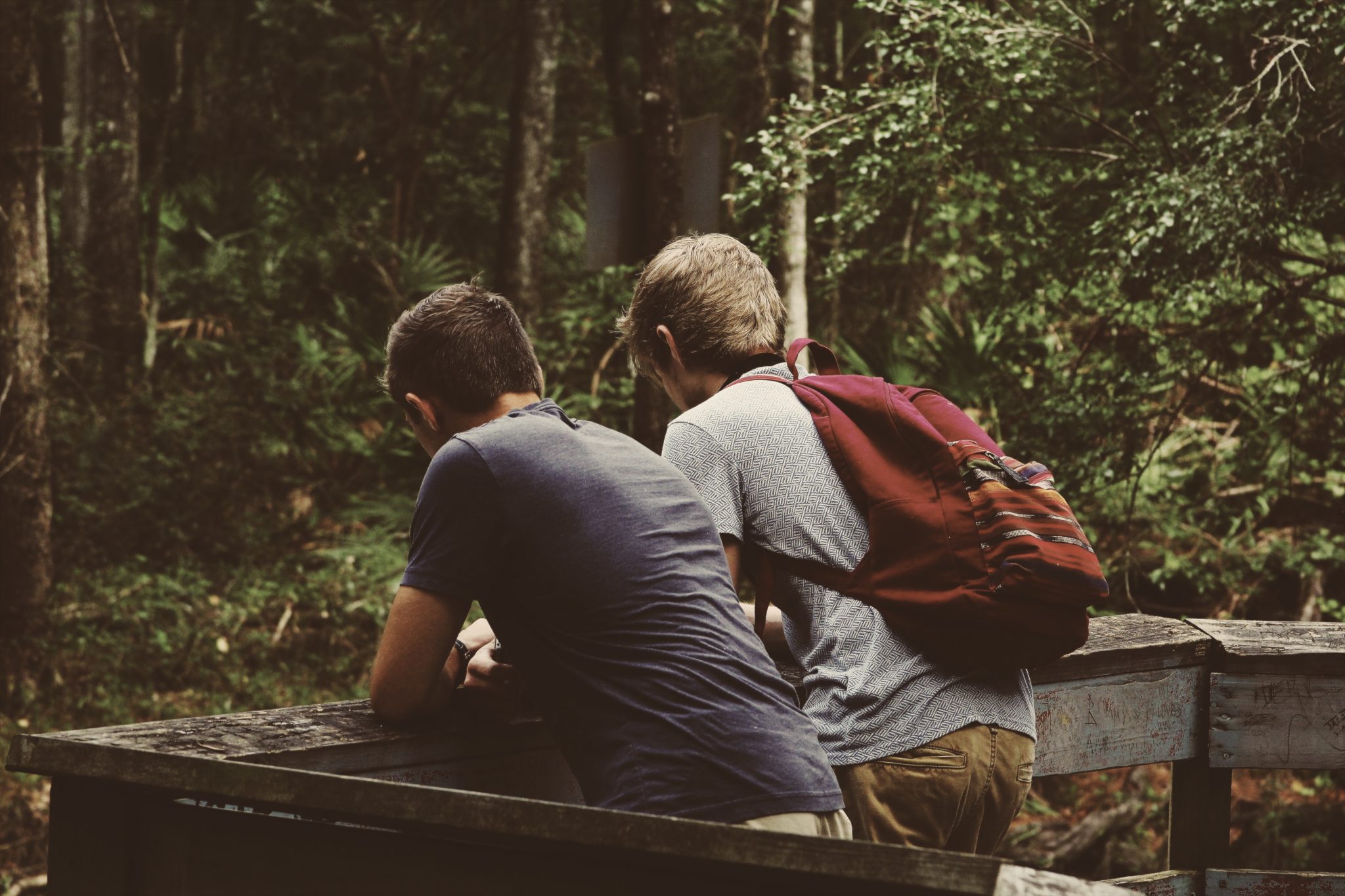 I never thought these cultural artifacts would have anything in common — a classic book written about turn-of-the-century English society and a sculptural installation containing detailed miniature scenes by a contemporary Canadian artist.

But, in an odd way, they did. They both talked about the end of friendship.

I was at the artist’s tour of Secret Citadel as Patterson led the crowd around his chronological work that starts with complex miniature versions of his and his childhood friend Yuki’s homes in Saskatchewan.

Then Patterson walked us over to two life-sized bunk beds called “Camp Wakonda.” Two boys play archery on the top level. On the bottom, a car crashes with a school bus and erupts in flames.

In an interview with the Now newspaper, Patterson says, “It speaks about adolescence and destruction and where friendships go to die. I had a car accident with a van when I was 16. No one got hurt, but a friendship was basically ruined. It was my fault… There was a lot of guilt and this is the semi-fictional spark that ignites those memories.”

Turns out Secret Citadel is all about Patterson’s friendships — not just with Yuki, but all his male friends at some point in his thirty-something life. That’s why he puts animal heads (a cougar and a bison) onto two human figures as a broader form of representation. You see these masked characters jumping on a trampoline as children, wrestling each other in adolescence, and drinking in bars alone as adults.

It got me thinking about the unfortunate ways that friendships die.

In Howards End, two close sisters with liberal values, Margaret and Helen, become torn apart when Margaret gets engaged to Mr. Wilcox, a rich older widower who represents a system and values so different from their own—capitalist, rational, unfeeling.

While there are multiple tragedies in the novel, the dissolution of the sisters’ friendship was the sharpest to me (maybe because I had just had an argument with my sister). Helen cannot like Mr. Wilcox and tells Margaret so. She dislikes him even more when she finds out he had a mistress in his first marriage. This mistress is now the wife of Helen and Margaret’s friend Leonard, who is impoverished due to some ill-timed business advice that Mr. Wilcox gave him.

After hearing the scandalous news, Margaret resolves to forgive her fiancé and stay with him. Helen, however, runs away to Germany and avoids Margaret, barely replying to her letters.

It was at this point in the novel where I really started to care about the characters. The sisterly affection that seemed so cemented began to crack. They became the estranged friends in Patterson’s final sculpture, “Player Piano Waltz,” shown in separate window frames drinking in a bar alone and riding an elevator up and down from their bachelor apartments as a haunting melody plays on the keys below.

All of us can relate to these characters even though Patterson is speaking from his own experience. Friends we once cared for are now close only in memory (or via Facebook status updates). Maybe the relationship ended over a specific disaster or it was subject to the drifting tides of time, place, and circumstances. From living in three Canadian cities during my university years, I’ve had a fair share of the latter. I see these friends and I as the animated cougar and bison projected on the walls of the art gallery, doing parallel choreography (trying out jobs, getting married, searching for community) but on separate trampolines.

This is a sad but inevitable part of growing up. Friendships that end in an abrupt “Camp Wakonda” way don’t seem so inevitable though. Maybe that’s why hearing about Patterson and his friend’s estrangement after the car crash felt especially tragic—when two people don’t have a “natural” reason to be friends anymore.

Refreshingly, Forster takes a similarly tragic situation threatening two sisters’ friendship and offers us a different resolution. The picture closing Howards End is one of unexpected community. Two fragmented houses are reconciled under one roof thanks to Margaret and her ability to bridge the softened Mr. Wilcox with the pregnant Helen who ran away because she was carrying Leonard’s baby.

Margaret’s thoughts about marrying Mr. Wilcox strike a surprising resemblance to the anthropomorphized cougar and bison in Secret Citadel:

“Mature as he was, she might yet be able to help him to the building of the rainbow bridge that should connect the prose in us with the passion. Without it we are meaningless fragments, half monks, half beasts, unconnected arches that have never joined into a man.”

And then comes her insight that sums up the theme of the book:

“Only connect! That was the whole of her sermon. Only connect the prose and the passion, and both will be exalted, and human love will be seen at its height. Live in fragments no longer. Only connect, and the beast and the monk, robbed of the isolation that is life to either, will die.”

Forster’s novel shows a believable and beautiful example of what can happen when there is a willingness to connect. Margaret’s language implies we are more fully human when we do this –when we choose to connect our lives with others by loving, forgiving, and showing grace, even to those who see things so differently from us. These are the actions and postures that reflect the God who first loved us and made us in his image. He created us for relationships, and it is in and through relationships (with others, ourselves, God, earth, culture, etc.) that we experience the fullness of life. When we love, we’re building a bridge towards wholeness, offering a picture of the world as it could be.

It made me wonder what the narrative arc of Patterson’s tale would be had his friend forgiven him for the car crash. Certainly there would still be bittersweet moments, but maybe a friendship wouldn’t have been relegated to the secret citadel of memory. Maybe the cougar and the bison would take off their grudges, resentments, and hurts they wear like masks, step across the room, and drink a pint together.

In my case, I need to go call my sister…

Charlene Kwiatkowski is a writer and editor living in Vancouver, British Columbia. She loves walking the city, taking way too many photos, and blogging about what she sees and reads at textingthecity.wordpress.com.