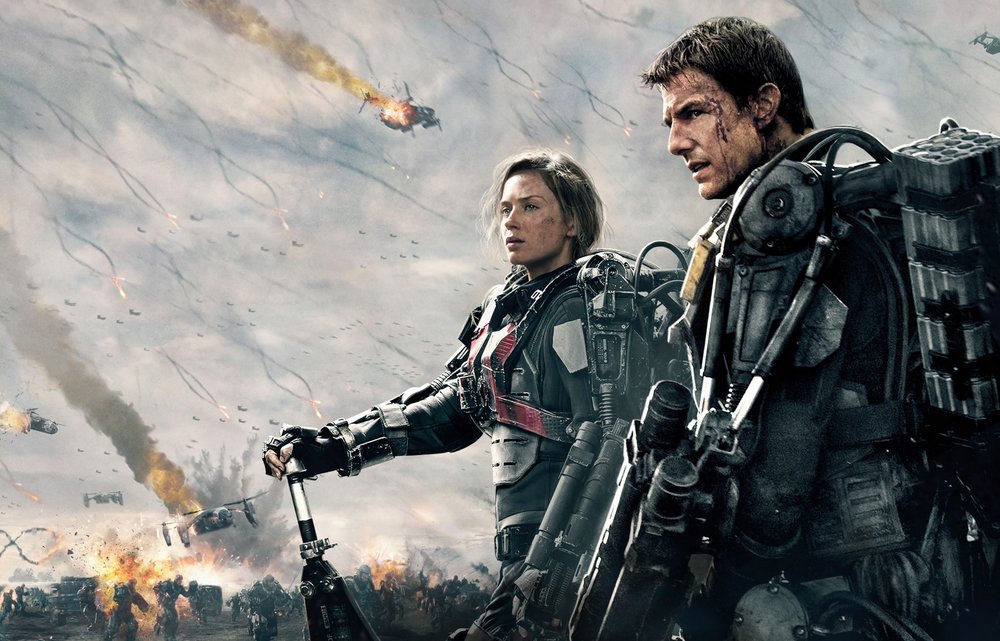 The trailer didn’t impress me. Another in a long line of sub-par attempts at a summer sci-fi blockbuster? Tom Cruise playing another action hero? No thanks.

But Edge of Tomorrow not only met my expectations, it exceeded them. Directed by action veteran director Doug Liman (The Bourne Identity), starring Tom Cruise and Emily Blunt — there are other characters, but these two drive the film — it’s a simple sci-fi premise that doesn’t try to create an epic backstory or weave in current political or social commentary. It’s pure entertainment, done well.

Adapted from Hiroshi Sakurazaka’s novel All You Need Is Kill

, the film sets up a war between Earth’s United Defense Forces and a race of aliens, dubbed Mimics by humans, who crashed to Earth on an meteor, and then began attacking humanity. Thankfully though, the exposition is minimal, and kept to the background for the most part.

Major William Cage (Cruise), has never seen combat, instead opting to become a television spokesperson and recruiter for the military. However, when one final offensive is launched against the Mimics, inspired by D-Day, General Brigham (Brenden Gleeson) orders him to the front. Cage reveals the yellow streak down his back when he first tries to talk his way out of it, before trying to bribe and threaten the general. Brigham has him arrested and incapacitates him after he tries to run, and the next thing Cage knows he’s waking up on the army base, his rank stripped, and is forced to join a squad of misfits without even a day of training to arm him. He dies in the first day of combat, as the entire operation is ambushed by the aliens, only to wake up again the previous day on the army base. No matter what he does, he can’t get out of that loop.

It wears its influences on its sleeve; it’s obviously indebted to Groundhog Day, Source Code and Starship Troopers, but it also looks to movies like Saving Private Ryan and Full Metal Jacket for inspiration, while borrowing aesthetic elements from Elysium and even a little bit of The Matrix: Revolutions. But it doesn’t try to be any of these movies.

It stands on its own two feet, playing off Cruise’s charisma and his chemistry with Emily Blunt, who plays Rita Vrataski, a war hero who is the only person to trust William Cage’s stories of time travel. The fact that Cage has to re-earn her trust each day, not to mention the respect of all of his squad members and his commanding officer, all of whom look down on him for being a deserter, seems like it would get tiring. A lot of their interactions could be like the kind of filler that some movies use between big set pieces — why would I want to see that again and again?

But that’s where the brilliance of the movie lies. We get snatches of the day’s progression each loop, progressively revealing more of what happens to Cage as we see more reincarnations. We see him progress from a smooth talking coward, scared of death — and it’s refreshing to see Tom Cruise as a sub par hero — who uses his repeated lives to try to escape the upcoming battle, to a man who tries to save the lives of his companions and better those around him.

The movie does lose steam in the last 20 minutes or so, as the interesting, slight variation on sci-fi and action clichés rapidly denigrate into just another generic ending that is as unsatisfying as they come. But the rest of the movie still makes up for it. If you’re looking for a big blockbuster to jumpstart the summer, you couldn’t do much better than Edge of Tomorrow.