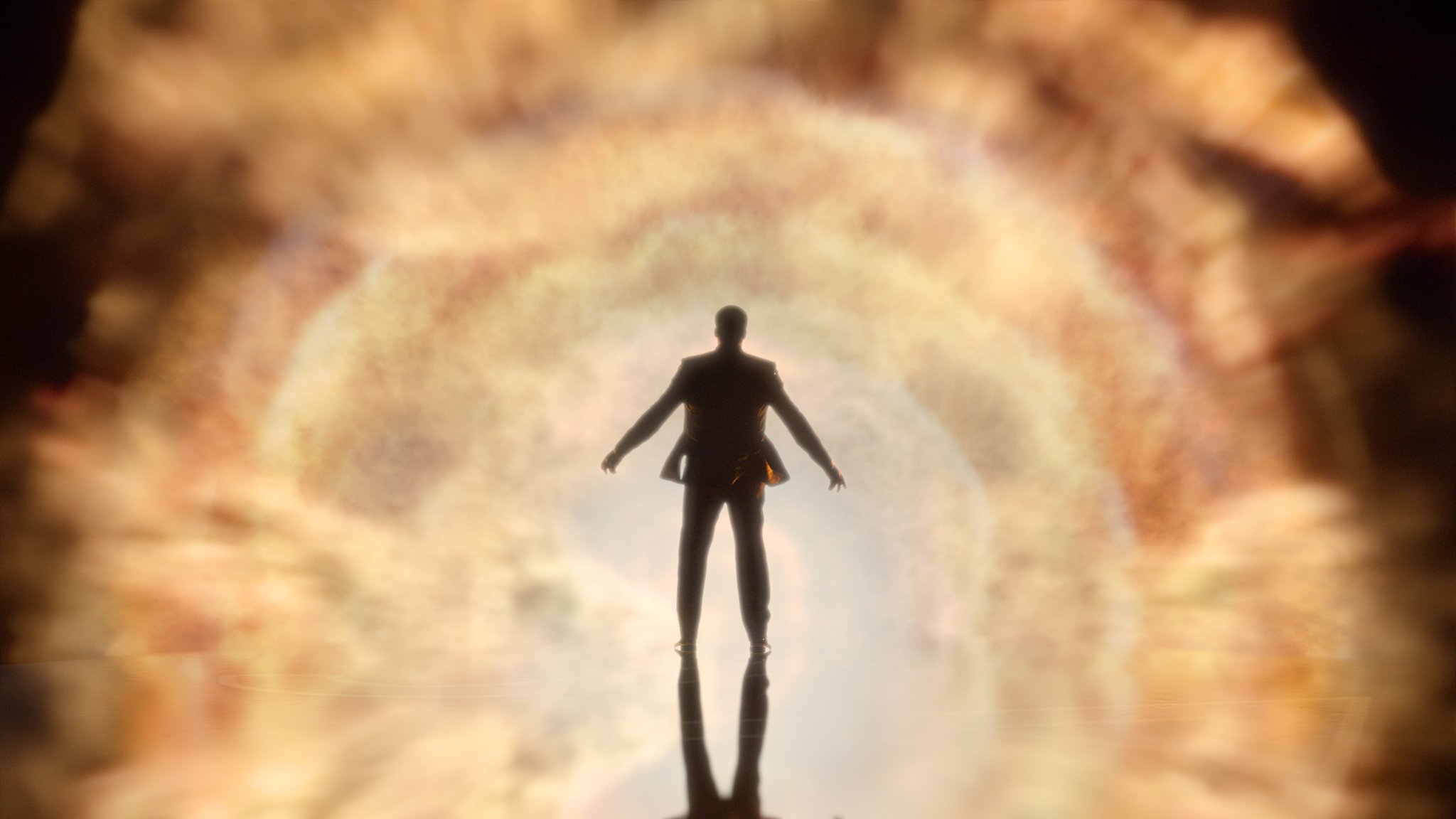 Once, years ago, my daughter and I were watching a television program that showed clips from the filming of the first moon landing. “Look,” I told her. “You are looking at a film of the first man to walk on the moon.”

I asked her why she thought it wasn’t real. Perhaps she’d seen or heard one of those conspiracy theories about the moon landing being shot in a Hollywood studio.

Her answer amused and surprised me. She told me it couldn’t be true because that’s not what space looks like. Space, she told me, looks like Star Wars, like E.T., like all manner of wondrous movies with special effects of stars as glittery jewels set to beautiful, suspenseful, orchestrated soundtracks that ebb and flow throughout each scene. Her eight-year-old mind had reasoned that space could not look like some silent dusty rock suspended in darkness, bounced on by some human Stay Puff Marshmallow.

My view, influenced by the black and white images of space from my youth, was close to C.S. Lewis’ description of the modern conception of space as “an abyss of darkness.” But Lewis had another conception of the heavens that he loved and taught; it is part of the “medieval model.” In this worldview, the heavens were imbued with significant theological meaning.

While our contemporary model of the universe is less systematic and lacks such theological significance, numerous people still believe God created it. Huffington Post recently published an article on a Gallup poll that indicates 46 per cent of Americans believe in creationism.

Meanwhile, Neil deGrasse Tyson’s reboot of the series Cosmos: A Spacetime Odyssey has just completed its first successful season. Many Christians see the show as a direct attack on Christian beliefs — and on creationism in particular.

Our culture is currently engaged in a worldview struggle focused on conceptions of the universe. But this concept isn’t new, as C.S. Lewis rightly states: “We are all…familiar with the idea that in every age the human mind is deeply influenced by the accepted Model of the universe.”

On one side is the young earth creationism model, and on the other side is the scientific model. And, supposedly these two views are incompatible.

On one side is the young earth creationism model, advocated by Ken Ham, and on the other side is the scientific model, advocating the big bang theory and evolution. And, supposedly these two views are incompatible. Or so many would have us believe.

Recently, the worship group Gungor received criticism for comments that briefly mention Gungor’s inability to believe, among other things, in a literal Adam and Eve.

But, as Aaron Ross notes in Relevant, “Oddly, the comments were made in an interview with the Oakland Press back in 2012 and in a blog post they wrote the same year, but are just now on the receiving end of social media outrage.”

So, why did it take two years for Gungor to rile up folks with their statements?

Perhaps the push back came about recently, rather than two years ago, due to the rise within Christian circles of creation versus evolution debates and conversations. It has become more and more a hot button topic, pitting science against religion in a battle for the hearts and minds of our youth.

For example, a recent issue of Converge Magazine focused on creationism and evolution. As Leanne Janzen notes, “faith and science are perpetually staged as opponents.” Or as Paul Arnold clarifies, “scientific secularists get to define religion as an evil social construction; religious fundamentalists get to define science as a skeptical philosophy used to corrupt the young.”

In spite of the hullabaloo surrounding the Cosmos series — or perhaps because of it — my husband and I decided to watch it. And, like that day long ago with my daughter, I had my conception of space challenged again.

Neil DeGrasse Tyson reeled me in when in the first episode he suggests, “To make the journey we’ll need imagination.” Yet he also acknowledges “the reality of nature is far more wondrous than anything we can imagine.” As a Christian who believes God created all, I wholeheartedly agree with this.

And, while I thoroughly enjoyed the series, I can understand why creationists would have difficulty with it. Not only does it assume evolution is true, it also co-opts religious language and highlights the scientific contributions of historical people of faith. Particularly those scientists who were hindered or persecuted by organized religious communities.

These choices are clearly a rhetorical strategy. And yet it has an odd effect. It shows that faith is not incompatible with science, yet it also suggests that organized religion or group beliefs can be dangerous for individuals who think differently.

Now, while my critical-thinking-self analyzed the points mentioned above, something else struck me. I was reminded of C.S. Lewis’ descriptions of the medieval model. Not because the Cosmos model was similar in design. It isn’t. The medieval model was a systematic presentation of a vast — yet finite — hierarchal orderly universe, while the Cosmos model presents a chaotic tumultuous infinite reality.

What reminded me of Lewis’ description of the medieval model was the sheer splendor Cosmos infuses the universe with. The production quality is excellent, but beyond that, the artistic vision is outstanding. Cosmos characterizes space as luminous, with swirling, churning, vibrant colours and awe-evoking beauty. And these visuals are accompanied by majestic music that similarly works upon one’s imagination.

Cosmos does not merely entertain or educate, but acts similarly to how Art functions. It opens us to glimpses of transcendence.

The view I was taught as a child, of space as black, cold, empty, and silent does not offer a true understanding of our wondrous creative God. Yet, surprisingly, Cosmos’ representation has the capacity, like the medieval model, to be imbued with theological significance. In this way, the series does not merely entertain or educate, but acts similarly to how Art functions. It opens us to glimpses of transcendence.

In Creation, Evolution, and Christian Lay People, Tim Keller says, “Many Christian laypeople remain confused because the voices arguing that Biblical orthodoxy and evolution are mutually exclusive are louder and more prominent than any others.”

Keller asks an important question: “What will it take to help Christian laypeople see greater coherence between what science tells us about creation and what the Bible teaches us about it?”

We absolutely need to address and answer questions like these. We need to foster the ability to embrace mystery. We need to engage our imaginations and allow ourselves to experience awe and wonder. For awe and wonder are the appropriate responses to being in God’s presence, to encountering God. And believing one knows all the correct answers to all the important questions limits one’s ability to experience awe, to recognize and embrace God’s mysteries.

Cosmos entertained me, educated me, and evoked in me an awareness of my smallness and God’s enormity, of my status as a creature and God’s as Creator. I experienced exactly what Sarah Bessey, author of Jesus Feminist, recently tweeted: “Watched Cosmos. Feeling properly small and full of wonder again.”

Lewis claims he “delights” in the medieval model: “Few constructions of the imagination seem to me to have combined splendor, sobriety, and coherence in the same degree.” Yet, Lewis acknowledges its one flaw. “It is possible” he writes, “that some readers have long been itching to remind me that it has a serious defect; it was not true.”

Perhaps like Lewis, we can learn to find value and significance, and maybe even experience awe at God’s grandeur, in another’s creative work — whether or not we believe it is true.