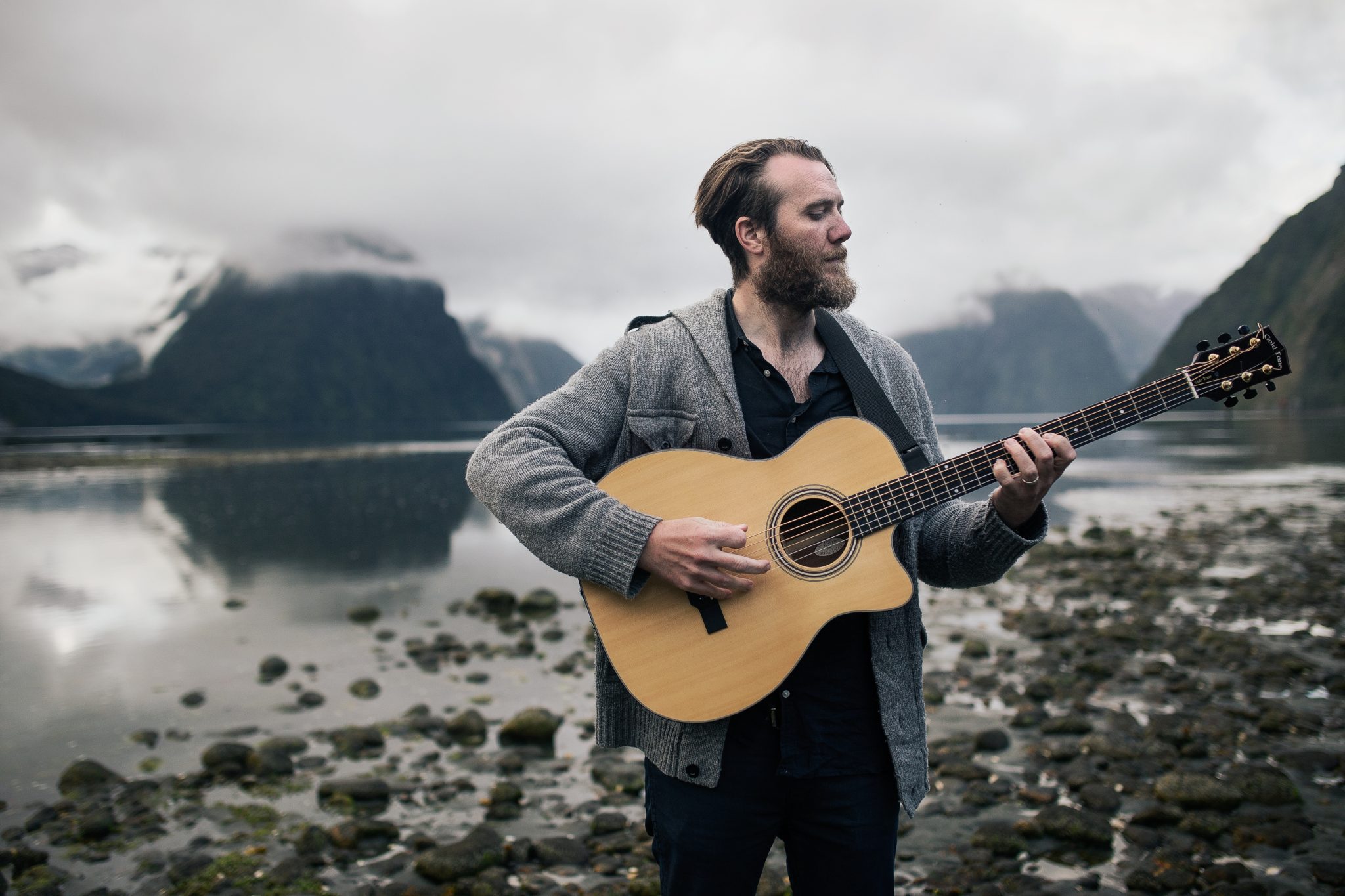 In the world of worship music, John Mark McMillan is a man that marches to the beat of his own drum. Blending Americana and praise, the North Carolina singer/songwriter has carved out his own path, writing some of the most moving worship songs this past decade including “How He Loves Us,” “Skeleton Bones,” and “Future/Past.” I spoke with McMillan this month about his pair of 2014 albums, Borderland and Borderland Sessions, darkness and honesty in music, and what he has planned for 2015.

Borderland was one of my favourite albums of last year. What was the impetus for wanting to make a pretty different record from your others?

There are a few factors. One, just to be honest, it’s so hard to make a living playing music. There’s just so many people doing it, so we had to do something different. At the same time, I didn’t really have a band. In the past I’ve sort of had the live experience in mind, and I was afraid we would record something we couldn’t repeat, but I sort of decided I would do whatever I wanted and we would figure out the live part afterwards.

I also really love playing different instruments. I’m obviously a guitar player, but guitar probably isn’t even my favourite instrument. I’ve been afraid in the past to explore other things, not knowing how we would do it live, but I just sort of decided I want to make the album I want to make. We kind of went in and whatever our ears wanted to hear we explored. It turned out different because I had been listening to all different types of music. There was so many people doing the Americana thing and the folk thing and the rock ‘n’ roll thing that I just sort of wanted to do something else. Not because I don’t like it, but how many times do you need to hear the same thing? Let’s try for something that moves us and feels unique. In the grand scheme of thing it wasn’t life-altering, but it was different for us.

I don’t know if this is something you considered when you were making it, but for me, there is kind of some post-rock elements in the songs. Just the way they are orchestrated, the way they build, reminded me of post-rock bands like Sigur Ros and Explosions in the Sky. Did you listen to that sort of thing?

I didn’t think of it that way, especially since those bands are so guitar driven, and there is hardly any electric guitar on the album. I was really into Sigur Ros seven or eight years ago, but I haven’t listened to them for a while. That never came to mind. I guess there is a lot of ambience, so I could see that aspect.

It’s definitely a bigger record. Did you employ a lot more people in recording it?

I guess we did. Elijah (Mosely) and I did a lot of it ourselves. We had different people come in and play and then we would chop it up and move it around and build it. We definitely had more musicians than something like Economy, which we only had five guys for. The Medicine was a much larger group, but this was definitely the biggest of the albums we’ve done.

Did the Kickstarter campaign help allow for that? How was that experience?

I loved it. I loved the community aspect, it was really cool to have all these people along for the ride. When we travel around, I get to run into them and talk to them. Labels can be full of so much talk. The creative should drive things. Business and ministry should be secondary. Creative should always be first. Record companies and big organizations can’t afford to think that way. That’s not to say I couldn’t have done Borderland at another place, but there would have to be so many more conversations to make it happen. Instead we made the record we wanted and didn’t have to answer any questions.

You can say let’s write this type of song. And then you can let the song tell you what the album is going to be about, instead of anything else.

Would you consider taking that approach with another record? What do you have in mind for the next record?

The only reason we wouldn’t is because the delivery was a beast. Honestly, it wasn’t the work, it was that people would move in the middle of the process, or type in the wrong address, or miss their package when it came. For months afterwards we had people writing me saying they never got their stuff, and it became such a huge deal. We never expected that part of it because we didn’t expect to raise that much money and we had so many people, like over 1,500 packages to put together. Then the vinyl showed up late, and the vinyl company was like weeks behind. So we had to send a separate thing. For the most part it was just my wife and I doing it ourselves, because if we hired a company we would end up using all the money we raised for other people to do it.

I loved the community aspect, and if I could figure out a better way to handle that aspect of it, I would do it again. Until then, we’ve done pretty well and have some solid investment with my record company (Lionhawk Records) that I can do it through that.

Are you considering releasing other artists under your label?

I am. We want to sign our first artist this year. So that’s the big thing for us. Also, my wife and I are doing a record together and we are going to release that probably through Lionhawk as well.

I think the rendition of “Heart Runs” on Borderland Sessions with your wife is beautiful, and it works really well as a love song and a praise song.

I know. And she’s beautiful, I love singing with her.

With Borderland Sessions, a lot of times artists will release alternate versions on a deluxe version or as bonus tracks. What made you want to deliver a completely different version of the album? What inspired you to do that? Was it just that there were a lot of different versions on the cutting room floor that you wanted to show people?

It was the latter. We actually went back and forth on how the songs should be presented. They could have went in multiple directions and I would have been totally fine with it. At a certain point, we had to decide whether it would be a more acoustic record and a bigger album, and we just decided to make two albums because a lot of the songs could go either way. We thought we would just do both and not worry too much about it.

Generally when people think of worshipful music they think of words like “positive,” “encouraging,” and “uplifting.” While your music certainly can be those things, one thing it does well is it brings the darkness and the brokenness into the picture to make the uplifting part that much more uplifting. Is that a conscious choice to make your music dark and grim at times?

I wouldn’t say that’s an intentional choice, but I want to allow the music to be what it needs to be. When I’m telling a story I don’t want to think too much about how it’s coming off. I don’t feel pressure to be an optimist. We just kind of write what is moving us and what is touching us and that’s what we try to present to people.

I think there is a lot of different ways that people go about writing and making records. There is a lot of money in making positive music. People support positive music or evangelistic music. Very often there is sort of another motivation behind it rather than just letting the song and story breathe on its own. We aren’t trying to be offensive, grim, or dark, but we just want the songs to live in their own space and don’t want to apologize for anything we are writing about. Writing music is hard, and finding the shelf for it to sit on is hard. But for us, we strive to let the song speak for itself a lot. If the song is going dark, we will let it do that.

For what it’s worth I think you somewhat created your own shelf, in that you combined Americana and this great tradition of Springsteen, Waits, Dylan and people that sing about mortality and spirituality and brought it into a worship space. Were you raised on those folks or is it something you got into later in life?

It’s something I got into later in life. I grew up listening to more classic rock like Eric Clapton and Hendrix, and Dylan was part of it. But until I got older and started thinking different thoughts, the Springsteen and Dylan stuff started to make more sense to me. When I was younger I just couldn’t connect to it. It definitely started to mean more to me in my mid- to late-20s.

2014 was a very busy year for you musically. Are you currently off tour spending time with family?

Yeah, I’m at home trying to write a new album, and we are still doing a handful of dates. We are going to do some international dates this year. Just trying to write to get the ball rolling.

Is that in addition to the album you are doing with your wife?

Yep. So the one I am doing with my wife should come out in the spring, and we are also talking about doing a live album we would maybe put out in the fall. And we are hoping in the winter to put out the new solo record.

You are a busy man.

We are going to Australia, Asia, and South America this year too.

So in Asia, do you have any idea how people will react to your music?

I have no idea, I’m excited. They seem to want us to be there so it will be interesting. My crew is pretty stoked about that. We love going to places where we are far away from home, and after you travel a lot that goes a way a little bit when you go to a lot of the same places. So I can’t think of where would feel further away than going there. We are definitely stoked about this year.

writes on music and faith from Chicagoland, and you can follow him on Twitter or at his music blog, Little by Listen.