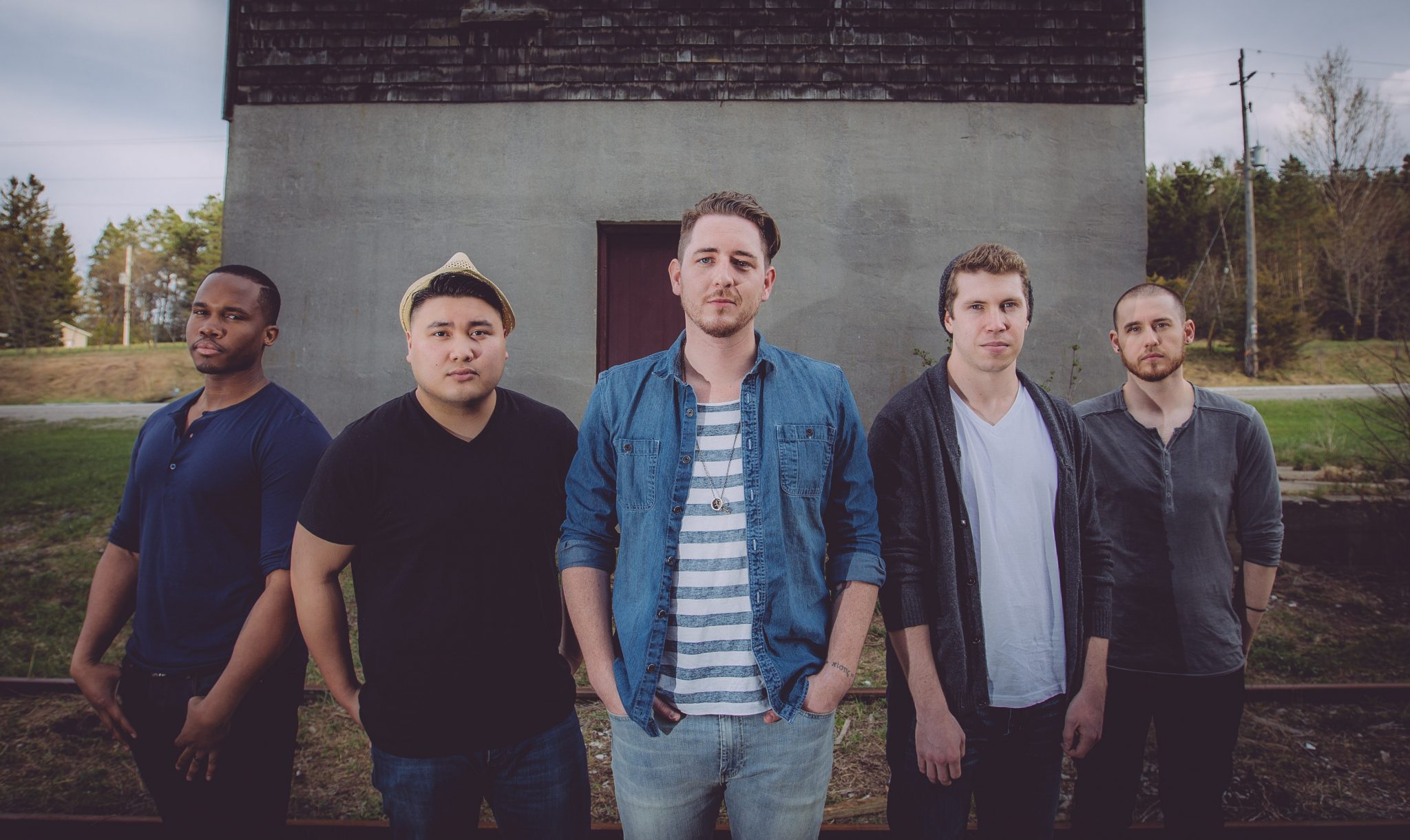 Lightfall, a Toronto-based worship band, released its first EP on June 24, and has already made quite the impact. The album shot up to #1 on the iTunes Inspiration Charts, #36 on the Canadian Top Albums and #67 worldwide (according to UK charts). Made up of five guys who came together from different churches and backgrounds, Lightfall Worship has a fresh sound and a reach that spans across denominations.

I caught up with the band in bustling downtown Toronto to get to know the guys, and to hear what lies in store for the newly minted chart toppers.

Your EP debuted at #1 on the iTunes Inspiration Charts. Did you guys expect that? How do you feel about that response?

Almost in unison: We didn’t expect it at all.

Mark (drums): One of our friends took a screenshot of iTunes and tweeted it at us, and was like, “You’re sitting in top five right now!” And we’re like, “Are you sure that’s us?” Then it just kept creeping up and stayed there for like three days!

Renz (front man): Yeah we just watched it, we couldn’t believe it.

Marquis (bass guitar): When we were working on [the album] and getting it together we never thought we would get the response that we did.

How many of you guys knew each other before Lightfall?

Mark: Well Renz and I knew each other, and Ryan and Marquis worked together. And Nathan…

Renz: He’s the funny one!

Nathan (rhythm guitar): I was the accident.

Mark: Yeah, Ryan found him on the Internet!

Nathan: It couldn’t have come at a better time honestly. I had been going through a similar situation. I didn’t know where to start, I was just about to give up when Ryan responded to me and it went from there. It was so cool.

How does coming from different churches and denominations affect the way you guys make music?

Mark: Our starting point is Scripture. We’ve done Pentecostal events, Methodist events; we’re doing a Baptist retreat this year. Denominations don’t really play a role as much as Jesus does. [The music] reaches across denominations. We always want to be conscious of where we’re going, as there are definite styles that some denominations are used to, so we have to be sensitive to that.

Renz: I definitely think that worked to our advantage, because we knew that it’s different in different places. I came to a church that was very expressive in their worship, but I’ve also been to churches that are very reserved.

Mark: It’s cool to see how God shows up through all these things, in different ways, and realize that He’s still the same all throughout, in all the places we’ve been so far.

What impact do you guys want your music to have?

Mark: Honestly, just to make Jesus famous. But, while we do it, we know that our impact individually, our talents and abilities, is what is helping reach people with Jesus. Our God-given abilities and making Jesus famous go hand in hand.

Renz: When we did our first gig [at a youth retreat], the kids were so nervous! They thought we were this hotshot band. A couple days into the retreat, they came and finally opened up and talked with us. When that barrier was finally broken down and the kids started to talk to us about music, we finally became approachable to them. I think it’s about making that bridge between youth and adults, or spiritual mentors or whatever you want to call it. We want to be able to share with these young people that, “Hey, we’ve gone through the same things that you guys have, and there’s salvation in this guy named Jesus.”

Marquis: It says on our website that our goal is to share God’s story. We want to walk away from our performances knowing that we gave them the opportunity to be with God, whether it’s through our performance, lyrics, etc.

Mark: There’s something really foreign about showing up at a place, leading worship and then disappearing. What this is is a ministry, and ultimately being able to connect with kids, pastors, and parents, whoever it is. It’s important to us that this isn’t just an isolated event; we want to be able to make a lasting impact in people’s lives. Like our first retreat, we’ve been able to come back and be able to see how God has changed the kids’ lives. We keep in contact through Twitter and stuff like that too.

Ryan: Yeah it’s nice that we keep going back to the same places. It’s nice to know that we made an impact because they want us to come back, and then we’re able to keep those relationships alive face-to-face as well.

So what’s happening now? What’s in the future?

Ryan: Well, we’re having a band meeting tomorrow! (Everyone laughs) Marquis had this great idea that we set goals for 2014, and we’ve actually achieved all of them — release an EP, at least play once a month — so we need to figure out what’s next. We’ve tentatively thought of doing a tour during 2015, and I think our goal is also to release a full album sometime next year too. All in all though, we’re just going to continue playing and continue praying. We’ve relied on God this far, and just because we’ve seen a bit of success it doesn’t mean, “Oh! We can do this by ourselves!” We’re going to continue trusting in Him.

I came away from this interview feeling like I’d made a bunch of new friends. These guys are down-to-earth and real, and they know their glory is God’s glory. Stay tuned for their full-length album sometime in the future.

is an International Development student at the University of Waterloo. When he’s not playing basketball, singing, dancing, or learning about how to save the world, he’s writing tweets for @CONVERGE_mag. He’s also the future husband of Emma Watson.