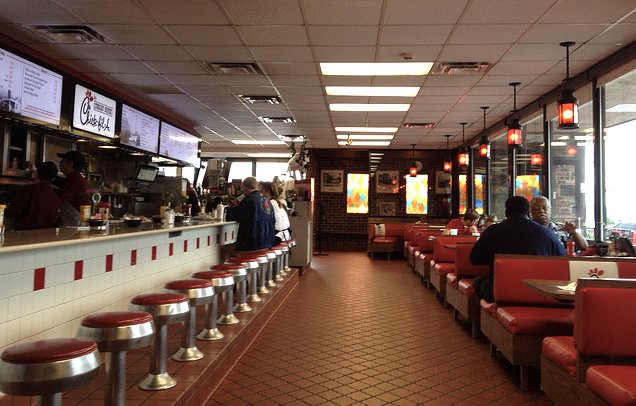 I had just graduated from Biola University and it was time to get my ﬁrst job out of college.

I thought, “Who wouldn’t hire me?” Bachelor’s degree, good job skills, great personality, upbeat attitude, and hard work ethic. Who else had these kinds of qualiﬁcations? Turns out, about 1,500,000 other graduates did.

It also turns out that the only company that wanted me was Chick-ﬁl-A.

Great. I felt like this was going to be an abysmal start to my career. I had recently gotten engaged and had just four months before my wedding date. I had to work somewhere, and I had to start now.

Reluctantly, I took the job in secret, hoping, praying, that no one I knew would come in and see me in uniform. But I thought I was surely doomed to serve someone I know our famous Chick-ﬁl-A Chicken Sandwich.

On my ﬁrst day, I was told to go into the bathroom to change into my uniform. New jobs are always diﬃcult, but this was especially hard. I looked in the mirror. I had just shaved oﬀ my beard because they don’t allow facial hair. And now I was going to put on this embarrassing uniform. It was like I was 15 and a half again, at my ﬁrst job never having gone through college.

I looked like it too. “What am I doing here? I shouldn’t be here.”

But I walked out and started. That day, I learned how hard people at Chick-ﬁl-A really work. When I was on the customer side of the counter, I only saw about 10% of the iceberg. I thought their job was cake. Now I had to eat that cake. And it was not at all like dessert.

They hold their employees to a high standard. You’re on your feet hustling for eight hours a day. When you’re not taking orders, you’re around the restaurant, taking people’s trays and asking them if they want fresh-ground pepper on their salad. Or getting their kids a play mat or toy. Or refreshing their beverage. The list never stops.

I even made their world-famous lemonade in those huge containers, which was quite possibly the most fun part for me. It’s simple: just lemons, water, and sugar. There’s nothing else, which is amazing because Chick-ﬁl-A lemonade is so distinct and addicting. Before I knew it, I was on drive-through duty. But to my surprise, that’s kind of the top of the chain, in a way. You have to be on top of everything and incredibly organized. And it’s much more fast-paced than the counter.

I’ve worked in the oil patch and the ﬁshing industry, and this was equal if not more work than what I did there. Service work, especially a quick-serve restaurant like Chick-ﬁl-A is a never-ending onslaught of activity. And I quickly gained a lot of respect for the people that worked alongside me.

It wasn’t until I came across Philippians 2 one night that I understood what God was trying to show me. His Son, “though he was in the form of God, did not count equality with God a thing to be grasped, but emptied himself, by taking the form of a servant, being born in the likeness of men.”

If I was looking out for my own interests, I would have not taken the job. But now there was an incredible woman whom I was going to marry and serve. No act of humbling myself could stop me from taking care of her.

God wants us to be like his Son. And his Son, even though he had access to all the power in the universe, humbled himself. Even though he is Master, he took on the form of a servant. He put on human clothes and chose to be recognized as such. Chick-ﬁl-A, for me, was a way to the cross: to be more like Jesus. Taking people’s orders for Chicken Sandwiches was the best thing that could’ve happened to me at the beginning of my career.